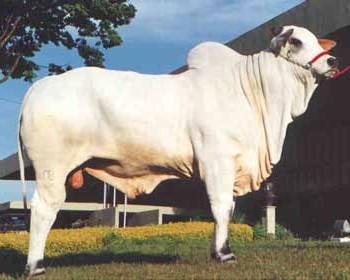 Recently a storm has erupted in Israel concerning meat. Wedding menus were changed at the last minute, and some yeshivos didn't enjoy their ordinary cholent for Shabbos. It turns out that for many years, a significant proportion of this meat (most of which is brought over from South America) does not come from ordinary cows. Instead, it comes from the zebu, a type of cow that has a hump, or from hybrids of zebu with ordinary cattle. But what is the fuss about?

The Torah says that for an animal to be kosher it must bring up the cud and have true split hooves. Within kosher animals, there are behemos (domestics) and chayos (wild animals). There are certain laws for which this distinction is relevant; the blood of a chayah must be covered with earth, and certain fats of a behemah may not be eaten. The Talmud (Chullin 59b) discusses the characteristics of an animal's horns that distinguish a chayah from a behemah. The complication begins with one of the commentaries on the Shulchan Aruch, the Shach (Y.D. 80:2). He mentions the discussion about the horns and adds "but since we now have nothing other than what we received by mesorah (tradition), I have been brief."

Pri Megadim understands the Shach as meaning simply that we rely on mesorah regarding whether a kosher animal is a behemah or a chayah. But Chachmas Adam (36:1) understands the Shach to mean that we need a mesorah as to whether an animal can be eaten at all, just as with birds. (With birds, there are no simple signs by which kosher types can be distinguished. Instead, the Torah lists 24 non-kosher types, and all the rest may be eaten. However we are not entirely clear as to the identities of all the birds in the Torah's list. While the Talmud gives signs by which kosher birds can be distinguished, the interpretation of these signs is very unclear. Thus, most authorites rule that birds may only be eaten if they have a mesorah. With mammals, on the other hand, the Torah gives easily recognizable signs, so it is novel to posit that a mesorah is required.)

This somewhat strange position of the Chachmas Adam was adopted by Rabbi Avraham Yeshaya Karelitz, the "Chazon Ish" (1878-1953). He was the leading halachic authority during the early years of the State of Israel, and addressed this point in the context of the question of foreign cattle breeds, such as zebu, that people wanted to bring to Israel. The Chazon Ish states (in Y.D. 11) that, while there is no necessity to find a reason for the position of the Chachmas Adam, it is basically due to a safeguard. He explains that permitting new animals could threaten the stability of halachah, and could also lead to complications in applying the laws of tereifos and so on. The Chazon Ish does not dispute the fact that the zebu is a kosher animal; he states that there is nevertheless a custom not to eat new types of animal without a mesorah. (A similar situation exists with birds; there are many birds that we are quite sure are not on the Torah's list of non-kosher birds, but we do not eat due to the lack of mesorah).

There is some dispute about whether there is indeed a mesorah for zebu. Rabbi Yitzchak Herzog (1888-1959), second Chief Rabbi of Israel, aside from rejecting the idea that a mesorah is required for mammals, claimed that there was a mesorah anyway. The Chazon Ish doubted the reliability of this mesorah, and also took the view that one community may not rely on the mesorah of another community (this is a debatable point if there is no mesorah to the contrary). Rav Machpud of the Bedatz "Yoreh De'ah" was recently quoted (in the Mishpachah newspaper) as noting that many righteous Jews in Yemen have long eaten the zebu, and there is no concern whatsoever about its kosher status.

By this token, it would seem that even according to the Chazon Ish, zebu should be permitted. The zebu is basically a cow, and it is fully interfertile with ordinary cattle (which was probably unknown to the Chazon Ish). In fact many zoologists do not recognize zebu as being a separate species from ordinary cattle - they are both classified as Bos taurus, with the zebu merely being a subspecies, Bos taurus indicus. (Occasionally even two animals of the same species are classified as two types by the Torah, such as wolves and dogs, which are regarded by most zoologists as the same species. However this is due to one being wild and the other being domestic. In most cases, animals that are of the same species are not considered as two types in the Torah. In many cases, even animals of several different species are rated as one type, such as the different species of pigs. The Torah's classification is usually much broader than that of zoology. There is a chapter about Torah vs. zoological classification in The Camel, The Hare, And The Hyrax.

A further point to consider is that at this point, many Jews have already been eating zebu for many years. This itself provides cause not to prohibit its consumption - or to realize the implications of prohibiting it. After all, there is no mesorah whatsoever for turkey, which was unknown to Jews before discovered in America. For reasons that are not entirely clear (click here to learn more), Jews began to eat turkey. If turkey were discovered today for the first time, nobody would permit its consumption. But now that Jews have been eating it for many years, nobody will now declare it forbidden and thereby indict the many people who already ate it, especially since it is certainly not actually a non-kosher bird (see Netziv, Meshiv Davar, Y.D. 22). By the same token, it can be argued that we should not begin to prohibit zebu, an animal that many people have been eating for a long time. It is certainly not clear that, given the current reality, the Chazon Ish would prohibit its consumption.

In conclusion, according to many halachic authorities, no mesorah is required for mammals. According to one position, adopted by the Chazon Ish, a mesorah is indeed required for mammals. (Although some claim there to be a mesorah for zebu, others contest the validity of this mesorah.) However, even according to this position, it does not seem that the zebu is a "new type of animal," and it seems that it should still be permitted, especially since people have already been eating it for years. Nevertheless, some may wish to act stringently and refrain from eating an animal that in any way appears "new." Of the various different Batei Din in Israel, some have permitted the zebu, and others have prohibited it; however even the latter permit meat of cattle that have already been slaughtered, on the grounds that there is a slim likelihood of zebu blood being significantly involved..

Copyright by Rabbi Nosson Slifkin, www.zootorah.com. If you would like permission to reproduce this essay, write to zoorabbi@zootorah.com.