The Power of Crocodiles 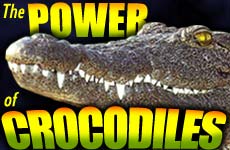 Crocodiles are the largest of reptiles. They can measure well over twenty feet in length, they account for more human deaths than any other large animal, killing around a thousand people in Africa annually. The largest animal attack in recorded history occurred during World War Two, when Allied troops besieged 1000 Japanese troops in a swamp overnight. During the night, the Allies heard terrible screams, and when they entered the swamp on the following day, only twenty Japanese were to be found; the rest had been killed and eaten by crocodiles during the night.

A crocodile's sense of smell is very acute, and its hearing is also excellent. It can detect the vibrations of a mammal moving around near the water's edge. With great accuracy, it can pinpoint exactly where the footsteps are heading. The crocodile will submerge, and without a ripple in the water, it will cruise towards its prey. It knows exactly when the animal is approaching the water, and at that precise moment, it strikes. The crocodile's powerful tail drives it forwards and it explodes out of the water like a missile. Once it has gripped onto its prey with its 66 teeth, there is little chance of escape.

Larger prey is first drowned and then broken up into swallowable chunks. The crocodile breaks up a carcass by seizing a limb or part of the body and spinning on a horizontal axis. Using this method they have been known to spin a leg off a human at the hip. The prey is swallowed without chewing; their stomachs are the most acidic recorded for any vertebrate, allowing them to digest even the bones and shells of prey animals.

As a rabbi, it helps me to know about such things -- it enables me to better understand certain verses in the Torah. 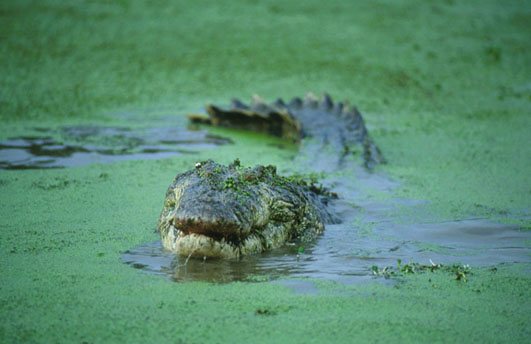 When God appointed Moses as the agent to redeem His people, He gave him a miraculous sign:

Moses responded and said, 'But they will not believe me and they will not heed my voice, for they will say, "God did not appear to you".' And God said to him, 'What is in your hand?' and he said 'A staff.' God said, 'Throw it to the ground.' And he threw it to the ground, and it became a serpent (nachash), and Moses fled from it. (Exodus 4:1-3)

Strangely, however, when Aaron threw his staff down before Pharaoh, a different event is described as having taken place:

When Pharaoh shall speak to you, saying, Show a miracle; then you shall say to Aaron, Take your staff, and throw it before Pharaoh, and it shall become a tanin. (Exodus 7:9)

Although some explain tannin here to refer to a snake (which the word certainly refers to in other contexts), others explain that in this context, it refers to the crocodile. It relates to a prophecy in the book of Ezekiel:

The great scaly creature that is the king of the Nile is undoubtedly the crocodile. It is the largest, most terrifying animal in Egypt, and the top predator. The Egyptians worshipped the crocodile, and they embalmed hundreds of them, after which they were wrapped in strips of cloth, just as the humans of the time. Pharaoh, king of the nation that worshipped crocodiles in addition to the Nile, is well represented by the crocodile. 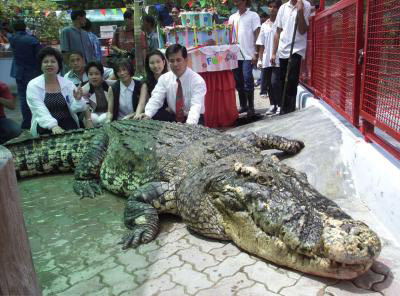 One explanation is that the staff appeared in different forms depending upon the context. With Moses' encounter with God, he saw a snake, a creature that symbolizes a fearsome evil power. The message was that God is all-powerful and can change a supportive staff to an evil force at will -- and the reverse. But when the staff transformed in front of Pharaoh and his court, it became a crocodile, the symbol of Pharaoh who claimed to be the god of the Nile:

"It shall become a crocodile" -- Why did God tell him that it would be a miracle involving a crocodile? Because Pharaoh is compared to a crocodile, as it says, "the great crocodile crouching in the river" (Ezekiel 29:3). When Moses would depart from Pharaoh, he would say, "If Moses comes back to me, I will kill him, I will impale him, and I will burn him"; and when Moses entered, Pharaoh instantly became as mute as a stick. (Midrash Shemos Rabbah 9:2)

Yet if Aaron's stick symbolized Pharaoh, then when the stick miraculously transformed into a crocodile and swallowed all of the other crocodile-sticks, this may appear to be demonstrating that Pharaoh does indeed possess power! But the important part of the symbolism is that afterwards it reverted back to a stick:

God said: This evil person boasts and calls himself a crocodile, as it is written, "The great crocodile..." (Ezekiel 29:3). Go and tell him: See this staff, it is a piece of dry wood; it shall become a crocodile with life and soul and swallow up all the other staffs, and it is destined to revert to a dry piece of wood. The same is true of you; I created you from a putrid drop and gave you empire, and you boasted and said, "My river is my own and I have made it for myself." Behold, I shall turn you back to nothingness and chaos. You swallowed up all the staffs of the tribes of the children of Israel, behold I shall cause you to disgorge all you have swallowed.... (Midrash Yalkut Shimoni, Shemos 7:181)

As the Midrash says Pharaoh's power stemmed from God in the first place, and was limited; it was revoked when he became arrogant and abused it. Man should never become overly convinced of his own power. Even the mighty crocodile, powerful and terrifying, is nothing more than a toy in the hand of God.

In the hand of man, though, caution is recommended.