The Feast of Delights

The event was of tremendous historic significance.

It was of extraordinary halachic importance.

It was of unbelievably exceptional uniqueness.

And parts of it were gross.

The purpose of the evening was to maintain a kosher status for creatures that are in danger of losing it. With birds, the Torah lists twenty-four types of non-kosher birds, and all the rest are kosher. However, it is impossible to identify the listed birds with any certainty. Thus, we may only eat birds for which we possess a mesorah, a continuous tradition, that the species is kosher and has been eaten. With mammals, the situation might seem more straightforward; the Torah states that for a mammal to be kosher, it must have split hooves and chew the cud. However, some later authorities added a requirement that there must also be a mesorah with mammals.

The problem is that in today's industrialized age, the only things that people eat are factory-farmed chickens and cows. The mesorah for other species is dying out along with the remnant of Jews from Europe and other communities. And once the tradition is gone, it is lost until Mashiach comes. A practical ramification of this would be, for example, that if mad cow disease were ever to render the entire bovine population inedible, substitutes would be lacking. 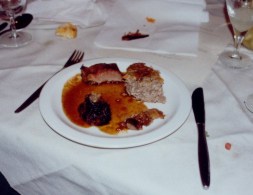 In an effort to keep the mesorah for other species going, my chavrusa, Rabbi Dr. Ari Zivotofsky, and Dr. Ari Greenspan, longtime friends and shochtim, arranged a "halachic dinner." During this dinner, all kinds of unusual species were served, along with lectures explaining why they are kosher, and a 150-page book of source material for each participant. The dinner thereby publicized and maintained the mesorahfor these creatures. As preparation for this, the two Aris had spent twenty years interviewing elderly shochtim and asking them which species they remember slaughtering in Europe, Africa, and Yemen.

Another person involved with arrangements for the evening was Dr. Zohar Amar, whose particular specialty is locusts. The Torah states that certain locusts are kosher and may be eaten. The Torah and Talmud even give signs by which these may be recognized. Again, however, according to most views, a mesorah is required. Such a tradition still exists in some Yemenite and Moroccan communities, and Dr. Amar was working to ensure that it wouldn't die out.

Amongst the guests at the dinner were several scholars who specialize in the topic of identifying animals in the Torah, including Rabbi Dr. Yisroel Meir Levinger of Basel, Rabbi Dr. Moshe Tendler, Rabbi Shabtai Rappaport, Professor Mordechai Kislev, and Professor Yehudah Feliks, the pioneer of this field of study. A government minister, Rabbi Yitzchak Levi, was also present; his cooperation had been invaluable in securing permission to slaughter some of the species. The dinner was held at the Eucalyptus restaurant in Jerusalem's Safra Square. The world famous chef at this restaurant, Moshe Basson, specializes in cooking with Biblical herbs and other ingredients, so this dinner was right up his alley.

The restaurant looked like any other restaurant set up for eighty or so diners, with one exception. Prominently displayed was an exhibit of many of the creatures that would be eaten. Hooves and horns of various mammals were on show. A live duck, a guinea fowl and two quails clucked in their cages. Locusts in varying stages of development swarmed around their vivarium. It was a wonderful opportunity to meet the meat.

First, for hors d'ouvres, dove and pigeon soup was served, along with a halachic intrigue: fleishige eggs. Although eggs are usually parve, these were incompletely-formed eggs that had been removed from a dead chicken, and therefore possessed the status of meat.

Next was turkey on rosemary skewers, in zatar sauce. Turkey doesn't sound like an exotic dish, but its halachic status is actually extremely complicated. There clearly cannot be a mesorah for a bird that was only discovered after Columbus! The difficult solutions to this problem were explored by Rabbi Dr. Zivotofsky.

A fig, stuffed with chicken, was halachically innocent, if culturally exotic. But this launched a series of bird courses. First was the "duck pond" - a delicious plate of goose, duck, muscovy duck, and mulard (a hybrid of muscovy duck and pekin duck). The unusual muscovy duck had formerly been prohibited by such authorities as Rabbi Samson Raphael Hirsch, due to the lack of a mesorah. However, the subsequent discovery that it could hybridize with regular ducks proved that for halachic purposes, it was one and the same type.

The next course was pheasant and partridge. Rabbi Moshe Feinstein had prohibited the eating of pheasant, even though he was convinced of its kosher status, due to the lack of mesorah. But in 1981, the two Aris discovered that Rabbi Yosef Kapach, the late Yemenite Torah authority, had a mesorah on pheasants. On the eve of the Lebanon war, the two Aris traveled to a kibbutz in the north of Israel to obtain a pair of pheasants. They brought these to Rav Kapach for identification and slaughter, and thereby kept the mesorah going. 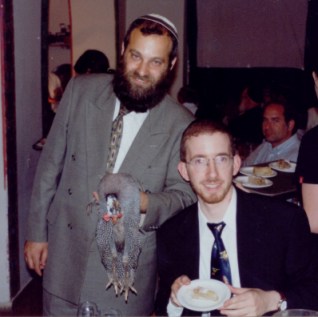 Following this came quail and guinea fowl, on a bed of roasted wheat kernels. Several guests started singing Lehisaneg besa'anugim, barburim u'slav ve'dagim, the Shabbos song that speaks of rejoicing with the culinary delights of fattened birds and quail. It had been difficult to track down a mesorah for the guinea fowl; and in the process of interviewing an octogenarian shochet in Har Nof, one of the two birds had escaped. Finally, Dr. Zivotofsky tracked down an Algerian in Netanya and a Yemenite in Bnei Brak who possessed a mesorah.

With the conclusion of the bird dishes, it was time to move on to mammals. The first dish was made from a regular cow. However, it was not a side of beef, nor a T-bone steak, and not even tongue. Rather, it was cubed cow's udders. I had a hard time keeping it down.

The seventh course was water buffalo and American bison (popularly but inaccurately also called buffalo), served as delectable dumplings in okra sauce. Water buffalo had already been explicitly identified as kosher by no less than the Shulchan Aruch itself. Dr. Greenspan showed a video of how he had brought the young buffalo from its ranch the previous day in the back of his car, which would never be the same again. The American bison, like the turkey, lacks a mesorah, but its ability to hybridize with domestic cattle (to produce "beefalo") renders it kosher according to all opinions. This was followed by lamb, served along with the spices that were used to prepare the incense for the Temple.

The chef brought in the spectacular next course himself. It was a deer, brought in on a huge platter, whole, with only its head removed, and stuffed with rice and raisins. A deer is also a kosher animal; its halachic status as wild rather than domesticated animal means that its fat may also be eaten, but its blood must be covered by earth immediately after the slaughter. 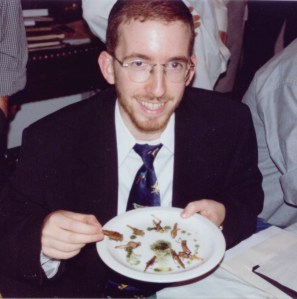 Then, after a lengthy presentation by Dr. Amar, the highlight was served: grilled locusts. These were desert locusts, obtained from a laboratory and taken the previous day to recent Yemenite immigrants for identification and cooking. As the Talmud proscribes, they had four wings that covered most of their body, jumping legs and four other legs. Most importantly, the Yemenites had maintained a tradition that these were the kosher locusts specified in the Torah. A further indication was that they possessed the sign of the Hebrew letter chet on their chests, which is nature's equivalent of an O.U. logo. Although some authorities had raised questions on the legitimacy of the Yemenite mesorah, it appeared that the responses to these difficulties were more than adequate. And so, in accordance with the ruling of many authorities, it was permitted for us (even those of us who were not of Yemenite origin) to eat these locusts. 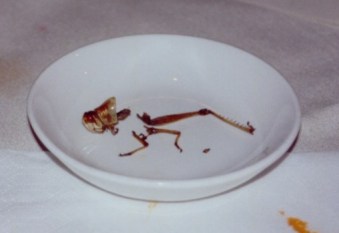 I must admit that eating a locust was not an experience that I would hasten to repeat. They were served whole, neatly arranged on a plate. According to the instructions, I removed the locust's wings and legs, and unscrewed its head. Then, with my face screwed up in repulsion, I ate it. Like many candies, it was crunchy on the outside with a chewy center. But all that I could think at the time was, Yeuuuuchhh, I'm eating a bug!!!

Dessert was "milk and honey" - almond milk with date and bee honey. This was followed by esrog liqueur. The meal had involved twelve courses and, with its lectures before each course, had lasted nearly six hours. We had attested to the perpetuation of the mesorahby putting this food down.

I just prayed that I would be able to keep it down.