"Can you draw out Leviathan with a hook? Or press down his tongue with a cord? Can you put a hook into his nose? Or bore his jaw through with a bridle ring? Will he make many supplications to you? Will he speak soft words to you? Will he make a covenant with you? Will you take him for a servant forever? Will you play with him as with a bird? Or will you bind him for your girls? Shall traders heap up payment for him? Shall they divide him among the merchants? Can you fill his skin with barbed irons? Or his head with fish spears? Lay your hand upon him, you will no more think of fighting! Behold, the hope of him is in vain; shall not one be cast down even at the sight of him? None is so fierce that dare stir him up; who then is able to stand before Me? Who has a claim on Me from before, that I should repay him? Whatever is under the whole heaven is Mine." (Iyov 40:25-41:3) 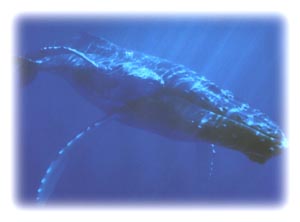 The wind was blowing in my face as the good ship Lord Hornblower sailed over the crests of the Pacific. We were about nine miles off Point Loma, on the coast of California, and we were hunting for whales. Our goal was to shoot them -- not with harpoons, but with cameras. Between the months of January and March each year, about 25,000 gray whales travel from Baja, California, northwards to Alaska. If we were lucky, we would find some of them. As the wind and waves tossed the ship around, I grabbed the rail and staggered into the cabin, where Captain Ahab -- sorry, I mean Captain Bob -- was radioing other ships in the vicinity while scanning the waves for spouts. The radio crackled to life as a ship several hundred yards ahead of us gave us a report:

That was all we needed to hear. Captain Bob sailed ahead at full speed and I raced to the fore of the boat. Every wave suddenly began to look like the back of a whale, but what I was really looking for was -- "Tha'ar she blows!" I called out. The spout blasted three feet out of the whale's blowhole. It was about a hundred yards to the right of the boat. The whale's huge, barnacle-encrusted back broke the surface of the water, and as the whale dived down, we saw its magnificent tail flukes. Then we saw two other whales just beneath the surface of the ocean. All three whales measured around fifty feet in length. I have been fortunate enough to encounter many animals in the wild, including elephants, herds of cape buffalo, and crocodiles, but there was no sight ever as magnificent as that pod of whales. 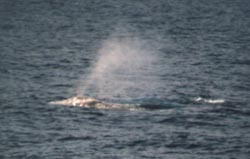 As we sailed back to the coast, escorted by a friendly school of dolphins, I reflected on the experience. The Leviathan mentioned in the Torah, although generally understood to allude to mystical concepts, is certainly referring to a whale at face value. It is described in the book of Job, in the context of God's reply to Job's query as to his sufferings. The essence of God's reply is that Job, as a mere human being, should not expect to understand his Creator's ways. God puts Job in his place by citing some features of the natural world that should humble him -- such as the mighty Leviathan, before which man is powerless. 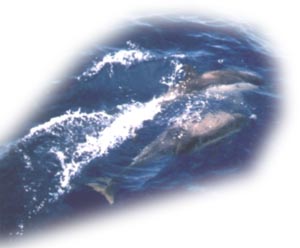 I began to wonder how well the description of man's weakness in the face of the Leviathan holds up today. "Can you draw out Leviathan with a hook?" asks God. Well, it's true that no fly fisherman is going to land a whale, and in the old days of harpoon whaling, the sailors would frequently be killed by their angry quarry. The whaling boats in operation today require all the power of modern technology to safely catch their whales, but they do manage to do it. Many species of whale face extinction as a result of their being hunted by man, and some species of whale are captured and put on display in the famous SeaWorld marine animal park. So perhaps it can be argued that man has now managed to draw out Leviathan. But further study of the description of the Leviathan shows that while the gap may have narrowed somewhat, the whale still has more than just an edge.

"Will he make a covenant with you? Will you take him as a servant forever?" Even the multi-billion-dollar venture SeaWorld, with all its phenomenal resources, has been unable to keep the great whales in permanent captivity. When SeaWorld rescued a gray whale calf that had stranded itself on a beach, they weren't able to keep it for long -- after a few weeks, it already weighed twenty thousand pounds and was growing rapidly! (Before releasing it in the ocean, they placed three radio transmitters on it; within a day it had rubbed them all off.) 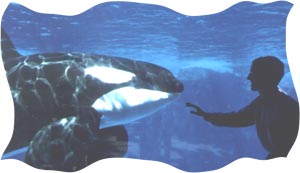 "Will you play with him as with a bird?" Absolutely, one might think; after all, look at the Shamu show, where trained killer whales leap to order. But killer whales shows are not exactly as they appear. Sure, the trainers play with the whales, but not as one plays with a bird. Every once in a while, a killer whale mauls a trainer, which birds don't tend to do. The various parks exhibiting marine life, which try to be as polished and squeaky-clean as Disneyland, don't like to talk about it, but it has happened on more than one occasion. In one unfortunate incident, a killer whale leaped out of the water and accidentally landed on top of a trainer, severly injuring him. On another tragic occasion, a killer whale dragged a trainer to the bottom of a pool, and held her there until she drowned. As much as the whales may appear to be controlled by their trainers, it is they who are ultimately in control.

We might be able to draw out Leviathan with sophisticated whaling vessels, but we still can't do it with a hook, and all of the other descriptions remain intact. The conclusion is clear. "None is so fierce that dare stir him up; who then is able to stand before Me?"