T'was late one night, and Dennis the zookeeper at the Jerusalem Biblical Zoo had gone early to bed in advance of a trip to Thailand. Suddenly, the telephone rang. He picked it up to hear the voice of Itzik, head keeper at the zoo, bark, "The hippo's out! Get over here now!"

This was when the Biblical zoo was at its old site, with shabby and rarely escape-proof enclosures, in the crowded neighborhood of Romema. The prospect of two-ton hippopotamus Matti charging around the streets was not a pleasant one. In their native African habitat, hippos kill more people annually than any other large animal. Dennis quickly dressed and made it to the zoo in record time.

Wandering around the grounds in pitch darkness, he looked for the hippo.

Nothing to be seen.

Then, hearing a noise behind him, he turned to see Matti bearing down upon him like an express train, or rather like a two-ton hippopotamus, which is a good deal more frightening. Dennis gasped and dropped his mouth open in horror; it produced a considerably less cavernous effect than the hippo's open jaws, some three feet apart. He did what any sensible person would do under the circumstances - he turned and ran for his life. 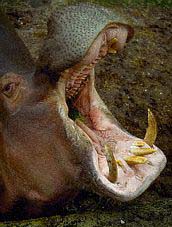 Unfortunately, although we tend to think of hippos as slow and ponderous creatures, lazing around in the water, that's because we usually see them only by day. At night they come out onto land to feed, and they can move at a speed entirely inconsistent with their vast bulk. Galloping at about twenty kilometers per hour, the hippo was about to turn the human into a pancake.

And then Dennis tripped and fell.

Which was the best thing that could have happened to him. Without time to get to his feet again, his only option was to roll to the side. As it turns out, hippos always charge in a straight line. Dennis rolled to safety as the massive creature crashed past him, knocking fences flat without pause. Eventually, the hippo tired, and Itzik managed to nudge it back into its enclosure with the jeep.

As Dennis told me this story, there was a distinct tone of relief in his voice. It was a lucky escape for him (although considering how many lucky escapes he has had in his career, I thought that he would view it as routine). Many years ago I had been privileged to feed the very same hippo, the great Matti himself, and the encounter made a distinct impression upon me. When I took the crate of cantaloupes over to his enclosure, and he rose up on the other side of the wall to meet me, it was like leviathan rising from the depths. The hippo's gape is enormous; easily big enough for an average-sized family to set up home in. The canines measure around a foot long. I tossed the cantaloupes into Matti's mouth, and he chomped them up the way we chomp croutons. Leaning close to him, I tried to pinch his huge rubbery lip, but my fingers were scarcely able to make an impression on the thick blubbery skin. Matti didn't make any noise; but some years later, while watching wild hippopotami at Mzima Springs in East Africa, I heard one of them roar, and it was a ground-shattering sound. It has been noted that hippos are awesome beasts, and I would like to add my own personal perspective to this: they are awesome beasts. There can't be any better way of putting it. Faced with such a behemoth, one can't help but feel overawed, overwhelmed, and humbled.

Which is precisely God's point when he says to Job, "Behold the behemoth that I have made" (Job 40:15). Job was complaining about the terrible suffering that he had endured; he couldn't understand how God could do such a thing. However, as God pointed out to him, this was precisely the point. Of course he couldn't understand how God could do such a thing! Who was he to expect to understand God's ways? "Where were you when I made the world?" (Ibid. 38:4) You pathetic little scrap of flesh and blood - what chutzpah to expect to comprehend the Grand Cosmic Plan of the Infinite Creator of the entire universe! Why, just consider one of God's playthings, the hippopotamus (called "behemoth" in the Torah), and you'll realize how small you are.

"He eats grass like cattle" (ibid. 40:15) - the hippo is a mere herbivore. Yet, "Behold now, his strength is in his loins, and his power in the muscles of his belly." A vegetarian he might be (though they have been known to make exceptions, sometimes even with humans), but he is still a mighty force to be reckoned with. "His bones are strong as bronze, his ribs are like iron bars." The mighty hippopotamus is almost unparalleled in the animal kingdom for sheer brute power. "He is foremost of God's works; let the One who made him draw His sword upon him" - do you dare match ourself against him? There's no beast that dares take on a hippopotamus (except, of course, another hippopotamus). "He sleeps under the bushes, in the shade of reeds and mud." Being such massive animals, the ration of volume to surface area is very large. As a result, hippos have difficulty in releasing excess heat from their bodies. They therefore spend the hot days resting amongst the reeds in the rivers to keep cool - "The trees cover him with shade, the willows of the river surround him." Even the natural elements hold little power over the hippopotamus: "Behold, the river can rage, and he won't be swayed" - the fiercest currents have no effect on this giant. "He is confident, for he can draw all the Jordan into his mouth." This poetically describes the vast gape of the hippo, into which it looks as though all the river could flow: "He takes it in until the springs."

Next time you visit the zoo, take a look at the hippopotamus, and be glad there's a strong wall between you and it. The experience that Dennis underwent was not fun - it was truly terrifying. Contemplate the might of the behemoth, gain a sense of awe, and reaffirm the gap between you and your Creator.