My nephew stared in astonishment. He pointed to the large hairy thing hanging from my arm by its sharp claws.

"It's a sloth," I replied. Then, since he was only three years old and probably unfamiliar with the term, I added, "Sort of like a monkey, but it lives upside down."

He moved closer to examine it in greater detail. Suddenly it lunged towards him and he yelped as it fastened its jaws around his nose. It gave his nose a tweak and then looked around, grinning.

Okay, so it wasn't a real sloth. It was a very lifelike puppet that I bought for a considerable sum of money at the National Zoo in Washington. I had set my eyes and heart upon it in the gift shop, but first I wanted to see the real thing, which I had missed in my tour of the small animal house. So I returned to look again at the cage.

The enclosure was fairly large and contained several types of animals, all from South America. Leaping through the trees were marmosets and other monkeys. Slumped over a rock at the back was a large iguana. Lying on the floor of the enclosure were several leathery spheres, each about the size of grapefruit. Occasionally one would unhinge itself and scurry around on the tips of its claws -- an armadillo. Agoutis, which resemble guinea-pigs but have longer legs, ran around the floor.

But no sign of the sloth. I sat in front of the cage, carefully inspecting every inch of it. I have to admit that I do take some pride in my ability to spot animals where other people can't -- I see more lizards during a walk in Jerusalem than most people would imagine exist in Jerusalem. But, after ten minutes searching, I simply could not spot the sloth. It was doubly irritating because three days earlier, at a rainforest exhibit in the Baltimore Aquarium, one of the staff had told me where to look for the sloth, and I hadn't been able to find that one, either.

"Ooh, look at that!" pointed a woman who passed by the cage at that moment. "A sloth!" 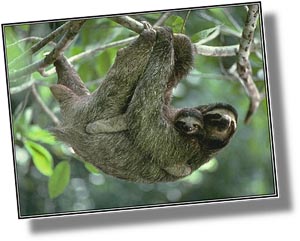 Of course, once it had been pointed out, it was obvious. There it was, hanging from a branch by its massive claws, no more than ten feet away from me. Its shaggy coat wasn't too different in color from the tree (in the wild, sloths even have algae and insects growing in their fur), but that wasn't the best camouflage in the animal kingdom. The reason why it had been so difficult to spot was due to something else entirely.

It was utterly immobile. The sloth hung off the branch like a dead weight, without moving a muscle. Actually, the reason for this may well have been that it was a dead weight; a sloth's grip on its branch is so secure that in death it continues to hang unless it is forcibly unhooked. But, even when alive, sloths move little more than when dead, so it might well have been alive; there was no way to tell.

The eye is attracted to movement. I am good at spotting lizards, but they dart around swiftly. Security men at airports conceal themselves by standing absolutely still. A chameleon's color-changing ability is probably less crucial to its camouflage than its almost imperceptibly slow movement.

Being so slow, and indeed entirely immobile for much of the time, they are almost invisible to predators. By keeping such a low profile they avoid running into dangerous confrontations. As a result, they enjoy a high survival rate, and are one of the commoner animals in the rainforests.

Which brings me to an anecdote that I once heard. There was a woman who was very involved in a large organization that did some very valuable community work. But one day she consulted her rabbi about her desire to quit. In the course of her work, she said, she would hear all kinds of lashon hora and other interpersonal sins. She wanted to give up her important job and stay at home, where she would keep a low profile and avoid getting into any lashon hora situations.

The rabbi answered her with a (fictional) story. An importer once received word that his latest shipment had arrived at the port. "Hank," he called to his driver, "Go and pick up the delivery from the ship."

"Boss," he says, "You wouldn't believe the trip that I had. It was incredible. The roads were totally clear, there was no traffic. The scenery was incredible, it was so green and beautiful. And the weather was gorgeous! I tell ya, boss, it was the best drive I ever did."

"Yeah, but Hank," says his boss in alarm, looking at the truck, "Hank! What about the goods, Hank? You forgot to get the goods!"

It's important, said the rabbi, to keep your sights set on the donut, not on the hole. There are important jobs that need to be done. Sure, there are pitfalls and dangers along the way, and you have to avoid them as best as you can. But you have to go for the tasks anyway.

By keeping a slow and low profile, sloths save themselves from many dangers. But such a lifestyle has serious drawbacks. Sloths just don't get much done in life. Their birthrate is low, with a single young born once a year. They can't do much for their kids anyway -- a mother rushing to help her threatened infant was timed at 14 feet per minute. They don't get to see much of the jungle, and while it's true that animals don't really achieve things anyway, sloths achieve less than most.

There is a folktale of the Karaja Indians concerning sloths. (I'm not as worldly as all that; usefully, it was printed in a card that was included with the sloth puppet.) It is said that in the rainforest of Brazil, where the sloth is called 'a-ee' because every once in a long while it sighs gently, "a-ee, a-ee," that once the a-ee fathers though of changing their ways. It was a stormy night. The wind lashed at the a-ee mothers and babies, and the rain soaked them, as they lay unprotected on the branches of the monkey-paw trees. They shivered (thus goes the story, but in reality sloths have too slow a metabolism to be able to shiver), and sighed, "a-ee, a-ee." A father a-ee said earnestly, "Tomorrow, we build nests!" "Yes, tomorrow for sure," the other fathers agreed. The next morning was sunny. The fathers basked in the warmth for a while. Then they ate their breakfast, slowly, for a long while. Then they took a nap for a long, long while. By then, no-one though again about building nests. At least, not until the next downpour. And what did the father a-ees say then? "Tomorrow, we build nests!"

Immobility saves you from many dangers, but it prevents you from achievements. This is a reality for all sloths and many people. People often prefer the safety of immobility to risk-laden action. They may desist from marrying, out of fears that their spouse would have hidden and unpleasant attributes. They may avoid taking journeys, out of fears for their safety. They may refrain from taking new responsibilities, out of fears that they may not be able to cope with all of the new demands. They may even have grounds for their fears. But if you take that approach, you'll never get anything done in life.

Before I published my first book, a number of people warned me against publishing. There will be mistakes in it, they told me. You'll lead people astray. You'll want to make changes later. I consulted my rebbe, Rabbi Binyomin Moskovits shlita, who told me to ignore them, though not quite for the reasons that I had expected.

"Of course there will be mistakes," he said. "Everyone makes mistakes. But if you play it safe and avoid taking action, you'll never get anything done in life. Do it, do it with the mistakes, and each new project will have less and less mistakes."

"For there is no righteous man on earth who does good and does not sin" (Koheles 7:20). I once heard this verse explained to mean that a man might be able to avoid sin by not doing anything at all; but if he does good, he is bound to sin at some point. As the old saying goes, the man who never made a mistake, never made anything.

All life contains risks. But there are jobs that we need to do, tasks that we are required to perform. We have to keep our sights set on the donut, not on the hole.